Bill McGeeney, of Round Guys Radio Network, here from Round Guys Brewing Company! I’m chatting with you today to discuss one of my all time favorite Round Guys Brewery beers, a beer called the Last Waltz. Now this beer released a year after the grand opening in 2012. It’s founder, Scott Rudich’s poetic license to declare liberation from the trenches of the pointless corporate careerism in search of finding more meaningful pastures! 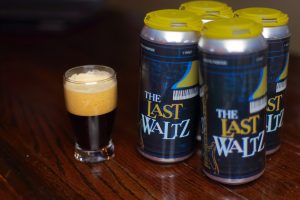 What is a Baltic Porter?

In its most basic definition, an imperial or high abv porter. This beer rolls in between 9.4-9.6% every year. It’s a full bodied gem featuring tasty malt driven flavors such as toffee, caramel, hazelnut, licorice, and vanilla. There’s next to no roastiness found in this beer. Hops play second fiddle in this brew, and as that be, their supporting role balances out the beer with minimal bitter impact.

Simple. I love this beer. It’s my most anticipated beer that we release! Find it every year from Black Friday through to Christmas, but act fast! This beer goes fast and is only brewed once!

Also keep your eyes pealed for special vertical tastings we do every year covering 3 years of Last Waltz releases.

Available From November to January:

[Check out additional stories on the Round Guys Radio Network, currently featuring: A Tale of Two Seltzers, how two groups of men’s paths crossed in pursuit to brew a better hard seltzer.]