About Round Guys Brewing Co 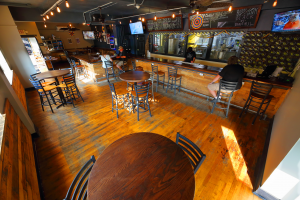 When did it all begin?

Prior to opening Round Guys, Rudich and DiLiberto spent a couple of years perfecting their craft via homebrew competitions. Take for instance, the Original Slacker English Style Brown Ale, which originated via a beer the two men brewed that took second in the 2010 Yards Clone Competition.

What makes us stand out?

Since the beginning, Round Guys has strived to deliver quality balanced beer. Balance, being the defining feature of Round Guys Beers, can be seen through all styles and shades of brews. Using a 7 barrel system, the brewery serves up 16 beers on draft with an addition draft line up of Gimme Seltzer, the house made seltzer brand.   Round Guys upgraded their kitchen in 2020 to include full meal options, including pub classics such as burgers, wings, cheesesteaks, and mac n cheese, to more wholesome plates including chicken tikka masala and teriyaki bowls. 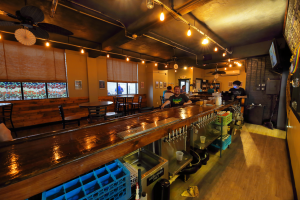 Why should I give it a try?

Last, but definitely not at all least, Round Guys serves up ‘all the beer‘ flights. So imagine your typical beer flight, but triple that size! It’s served to you via a barrel stave with additional flight glasses that don’t fit, on the side! 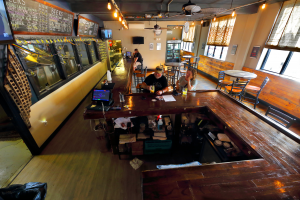 How do I order?

The brewpub maintains a spacious roadside patio for outdoor seating along with our original cozy indoor dining area. A fully renovated indoor space provides multiple tvs and an expansive bar area (complete with electrical outlets and hooks). Ordering can be done in person, online for take out / curbside, online for shipping (to Pennsylvania only), or by phone, at (215) 368-2640.

Who will feel at home at Round Guys?

Anyone, and everyone. From Grandma to your hipster brother.

Round Guys proudly started doing monthly drag shows in 2013, much ahead of the drag show craze (in fact, we periodically release our drag series beers). Round Guys joined a Lansdale wide effort to eradicate racism. Round Guys also features all types of charities to join us for trivia or one off events, notables include Dog Town Rescue, Luv-n-Buns, and the Hedwig House. With the exception of 2020, Round Guys proudly provided support and assistance to the American Diabetes Association’s Tour du Cure.

Where do I park? 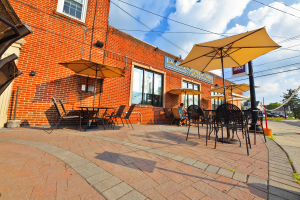 Parking at Round Guys is easy, we have two lots. Although technically Round Guys holds a 324 W. Main St, Lansdale, PA 19446 mailing address, Round Guys actually sits a hundred feet south of Main St, on Wood St.

Round Guys Brewing Company has its own paved lot 30 feet west at the intersection of Derstine Ave. and Wood St. (this parking lot can be accessed via Courtland St. – which looks like a small alleyway). Though, the unofficial lot may be easier to find, which consists of a dirt and rock parking lot the immediate block following the brewery, off of Wood St., directly between Courtland St. and Derstine Ave.

Round Guys can also be accessed from Philadelphia and Doylestown areas via the Lansdale / Doylestown Septa Train Line. The Brewery is a short walk down West Main St. from the Lansdale Train Stop. 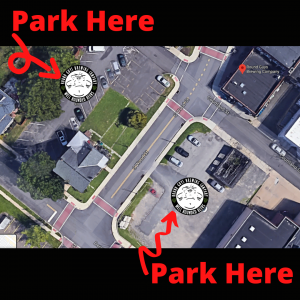 Yes, Round Guys Brewing Company offers Curbside and Take Out options. For Curbside parking, please pull up parallel to the facility on Wood St, facing Main St. You know you’re in the right place if our Patio / Entrance sits to your right. Curbside parking is denoted by a white road sign with red lettering stating “Curbside Pick Up Here.”